Basics of Layout and Routing of Switching Power Supply Boards

The article provides tips and tricks for creating a conductive pattern for considerations for PCB Power Supply Design and ground circuits when designing printed circuit boards, discusses the features of the star connection for power supply and ground lines, as well as multi-frequency decoupling of these circuits.

In addition, the article demonstrates how, by changing the arrangement of components, you can reduce the loop of high-frequency currents.

The development of electronic circuits is similar to the construction of high-rise buildings in earthquake-prone areas.

In both cases, functionality and durability are unthinkable without a good foundation.

What is an Ideal Power Source for DC in PCB?

An ideal power source converts the alternating current (AC) supplied to homes and industrial plants into the direct current (DC) required for electronics.

In an ideal DC world, there is no noise, no ripple, no AC harmonics.

In addition, in such a world, the ground, which is the reference point for the entire DC power system, is immaculate.

As engineers, we quickly learn that our world is far from perfect.

This means that we must use all our knowledge and skills to achieve the desired results, despite the existing limitations.

First, you need to understand your environment and understand that RF interference is often generated by external transmitters as well as digital circuitry running on the same PCB.

Let’s start with an AC outlet. In most cases, it is desirable to use a surge protector like the one shown in Figure 1.

The main purpose of the filter is to provide symmetrical bilateral protection.

It protects against interference that can enter the electronic device from the AC mains, and at the same time prevents interference generated by the device itself from entering the network.

Verify both the level of interference emitted by the device and the acceptability of the signals it receives.

The initial step for Considerations for PCB Power Supply Design is to select the ground connection points on the chassis and on all printed circuit boards.

Some inexperienced developers regard the earth as a kind of magical place where all leads disappear and all miscalculations are leveled. Sometimes they select the ground point first but do not provide separate paths for the return currents to this point from different types of circuits. Figure 2 illustrates a similar error. 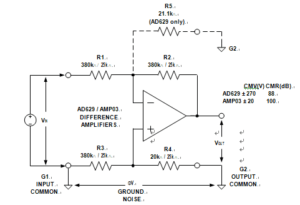 We start with the star-marked ground point on the +5 V power supply.

Noise generated by digital circuits will travel to both the 5 V power supply and ground.

It is clear that the analog circuit requires a “clean” voltage of +3.3 V, but we were too lazy to run separate tracks of the ground and +5 V rails to the points marked with asterisks on the power supply.

A linear LDO is needed to create a clean 3.3V, or so it seems to us.

In reality, the voltage at the output of the linear regulator will always be exactly 3.3 V above the reference voltage or ground potential.

Now let’s take an interest, how long will it take to find the reasons for the incorrect operation of the module, which does not provide for separate connection of digital and analog circuits to the power supply? The best way to connect an analog circuit is shown in Figure 3. 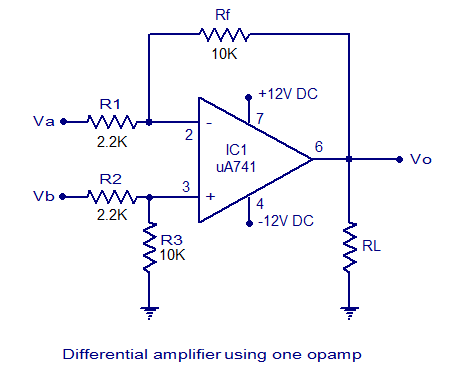 It is assumed that the ground and power supply are clean at the connection points.

No Noise between Ground and Power: Considerations for PCB Power Supply Design

Ideally, the output impedance of the power supply should be near zero, or decoupling capacitors with low equivalent series impedance in the frequency range of interest should be at the output.

Individual conductors that connect different circuits to ground and power points also have their own resistance and inductance.

We expect this resistance and inductance to isolate noisy circuits from clean circuits.

Series-connected resistance and inductance, as well as decoupling capacitors at the outputs of the circuit blocks, form a low-pass filter.

If the conductor going to the circuit block

Isolation is not easy because capacitors have parasitic inductances.

In practice, the capacitor is described as a series RCL circuit (Figure 4).

Capacitance dominates at low frequencies, but above the Self-Resonance Frequency (SRF) shown for different capacitor ratings in the graphs (Figure 5), there is a region in which the capacitor impedance is inductive.

Thus, a capacitor is only useful for decoupling in the frequency range near or below its SRF, that is, where its impedance is low.

It is very important for Considerations for PCB Power Supply Design. 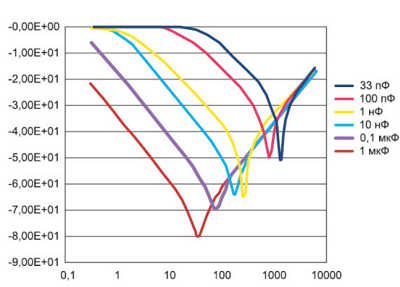 Figure: 5. Six capacitors of different ratings and their own resonant frequencies

The figure clearly shows the natural resonance frequencies (drops in the graphs).

These specifications also show that at low frequencies, capacitors with higher capacitance values ​​(lower impedance) provide better decoupling than capacitors of lower ratings. To plot the frequency characteristics of capacitors, you can use free SPICE programs [2 … 4]. 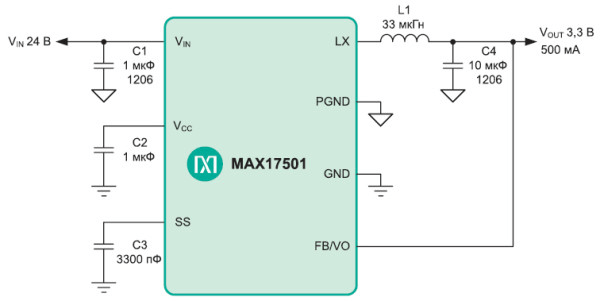 Figure: 6. Simplified diagram of a switching power supply based on MAX17501

In Figure 6, the input filter ceramic capacitor (C1) [5] is located near the VIN pin of the IC. This capacitor acts as an energy reservoir, smoothing out powerful pulses that would otherwise return to the DC power supply.

Depending on the Considerations for PCB Power Supply Design and rise time of the switching pulses, this capacitor can be composed of several capacitors of different ratings to cover a larger frequency range. The blocking capacitor connected to the VCC pin should also be placed as close to this pin as possible.

It is possible that this capacitor will also need to be composed of several capacitors. For the most efficient heat dissipation, several vias should be provided under the exposed pad to provide a thermal connection to the landfill. 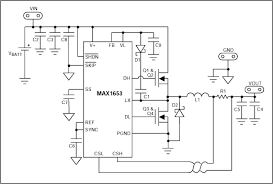 Figure: 7. Isolation between the earth, the point of their connection, and the path of a strong current (indicated by dashed line)

The current flow path shown in Figure 7 is the most important area in a switching power supply.

Isolation of the two grounds is critical for stable operation, as small changes, in this case, can have a significant impact on the efficiency and noise of the power supply, on the level of electromagnetic and radio frequency interference it radiates.

Since impulse currents flow along this circuit, to reduce leakage inductance (parasitic inductance), the printed conductors should be very short and as wide as possible.

The loop should be kept as small as possible: a simple 90 ° throttle rotation can improve board performance by 20%. To reduce the inductance of the via, two, four, or even more parallel vias are used as needed.

In Figure 7, the via is designated as a circle with a small circle inside, which means it is connected to a power ground polygon (triangular ground sign in the diagram). These vias are used to connect to the Power Ground Polygon (PGND) on the underside of the board and to connect to the common ground point marked with an asterisk.

Circles with an X inside indicate a reference or stable signal ground.

They connect it to a separate ground plane on the underside of the board and connect it to power ground at the common point marked with an asterisk.

For this reason, it should be connected to power ground at the point indicated with an asterisk, where the influence of switching processes is minimal.

Vias in the form of a circle with a “+” sign inside serve to supply voltage from the source output to the feedback output of the microcircuit. The printed conductor must be routed so that it moves away from the inductor and the current loop as quickly and further as possible. The series resistor (R4) should be as close to the feedback pin as it forms a low-pass filter with the input capacitance at this pin (Figure 8). 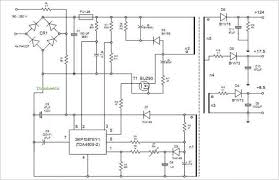 Figure: 8. Resistor R4 is placed near the output of the power supply, a long printed path to the
feedback pin (FB / VO) acts as an antenna.

What is Important in Considerations for PCB Power Supply Design for a PCB Designer?

An inexperienced PCB designer can look at considerations for PCB Power Supply Design and the circuit diagram and place R4 close to the power output, as shown in Figure 8. Since the inductor is an unshielded coil of wire wound around a ferrite core, it generates an intense electromagnetic field.

This field induces noise (indicated by orange dashed circles) entering the feedback terminal, which leads to unstable operation of the circuit since the conductor between the feedback terminal and resistor R4 turns into an antenna that catches noise at the edges of current pulses. 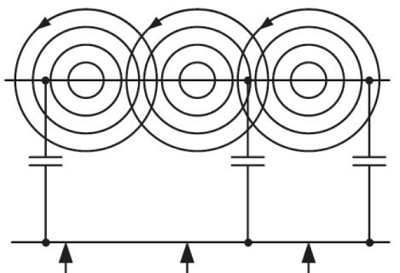 Figure: 9. Crosstalk between wires can be capacitive, magnetic, electrostatic, or a combination of both.

In Figure 9, wire A is a powerful source of interference and wire B is a high impedance receiver.

The level of induced crosstalk can be reduced by increasing the distance between the wires or reducing the impedance of the B wire.

Recall that although the switching frequency can be as low as a few tens of kilohertz, RF oscillations occur at the switching pulse edges, which create crosstalk and generate noise.

Since RF vibrations can span frequencies up to many hundreds of megahertz, they need to be controlled.

That is why it is better to apply a signal from the output of the source to the feedback terminal, as shown in Figure 10. The conductor runs at a distance from the powerful current pulse path (Figure 7) and the choke L1.

Resistor R4 attenuates any noise shown by the orange circles. Placing R4 near the feedback pin of the MAX17501 increases the efficiency of the low-pass filter formed by R4 and the internal capacitance. 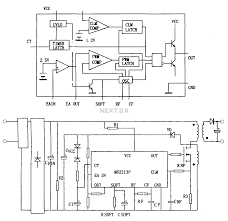 To explain the basic concepts, we looked at how to design a PCB of a switching power supply on an IC chip with embedded switch transistors.

For information on the design of switching power supplies based on microcircuits that drive external transistors, see other tutorials and articles published by Maxim Integrated.

That is why knowing the considerations for PCB Power Supply Design is crucial.

In turn, having a good quality clean supply voltage and clean ground, so necessary for any electronic device, will be a good foundation on which to build the rest of the circuit.

Another advantage for the designer is that with good power and clean ground, debugging other circuits is much easier.

Finding sporadic or intermittent bugs in noisy food and noisy ground can be a nightmare.

Experienced engineers, realizing the importance of a well-designed power supply, never waste time on it and do not shift this work onto the shoulders of less experienced colleagues. This is really important.