Control at the Assembly Production of Printed Circuit Boards

At all stages of PCB assembly quality checklist and assembly operations of printed circuit boards, control operations are performed:

By the degree of coverage, most operations are referred to complete control, i.e. all modules are checked.

The detected defects are recorded in the accompanying documentation for the unit for subsequent elimination, for statistical accounting and in order to identify and eliminate the causes of their occurrence. Defects are logged in accordance with the program and automatic equipment.

It is used in laboratory conditions or in pilot production.

Equipment – microscope with magnification from 2 to 10 times.

The quality of control depends on the qualifications of the operator.

In assembly lines, control is carried out by automatic installations. 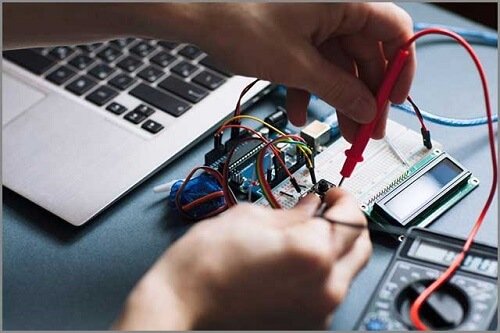 Automated control is applied at four main stages of the technological process:

The basis of AOI is the formation of images of objects and the analysis of the characteristic features of their elements.

A two-dimensional image of an object is formed by optical matrices.

To increase the contrast of the image, additional illumination of the inspected surface is used.

Monochrome systems are used, two- and three-color (the most common).

Background thermal radiation from the board and components can cause interference, and the interference can be compensated for by software.

The image is digitized and a matrix is ​​formed that carries information about the object.

The generated picture can be compared with a reference board image or with assembly information based on CAD and Gerber files.

These systems allow 100% PCB assembly quality checklist at speeds up to 150,000 cph, but are sensitive to board and component material changes.

Most AOIs are good at detecting component placement defects and less successful at distinguishing between defects in solder paste application or solder quality.

Optical systems based on lasers can form a three-dimensional image of objects.

They are also used for two-dimensional analysis of assemblies, especially in cases where the observed elements have a small height or slight difference in contrast (holes, reference points).

Laser systems as part of automatic collectors do not form an image of the object, but analyze the reflection from the component, and if there is a shadow instead of the reflected beam, then the component is skipped during installation and the system issues a corresponding message.

To control the quality of PCB inner layers and the quality of soldering of some types of components, the analysis of images obtained with X-ray equipment is used.

The image of the internal layers of the MPP and the soldered joints of the ball leads of the BGA packages, hidden under the bottom of the microcircuit, can be obtained due to the high penetrating ability of X-rays and the different ability of materials to absorb them.

The penetrating power of radiation depends on its energy, which is determined by the voltage across the X-ray tube.

For PCB plastic, a voltage of 30 kV is sufficient; to examine the soldered contacts of a BGA component, a voltage of 100 kV is required.

Such radiation does not pose a danger to personnel, since it is completely absorbed by sufficiently thin metal protective walls.

X-rays provide images with a resolution of 0.5 to microns.

There are certain difficulties in forming an enlarged image of an object in X-rays, since lenses and other elements of conventional optics do not exist for them.

The main task lies with the algorithms for processing the image converted by the quantum detector into an electrical signal.

Good enough with the help of RKTU, soldering defects (non-soldering and short circuits), hidden under the microcircuit cases, are identified.

X-ray inspection can detect defects such as voids inside solder joints.

X-ray inspection has found wide application in the production of MPPs for detecting defects in the width of internal conductive paths, dielectric delamination, and others. However, the installations are very expensive; they are characterized by low control speed. 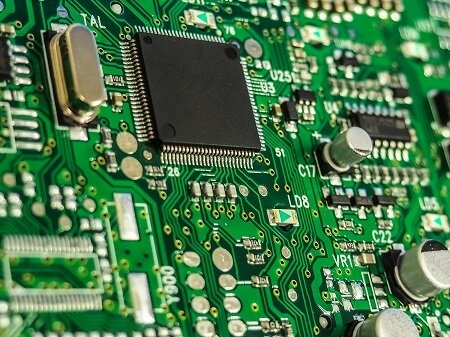 When testing the electrical method, the boards are installed on adapters built according to the principle of “contact fields”.

A low voltage (10 V) is used to detect short circuits and open circuits. The high voltage (500 V) tests the insulation for leakage and breakdown.

The presence of test contacts in vias allows localizing breaks with high accuracy.

The most responsible part of the testers is the test contact, since the reliability of the information depends on the quality of contact.

To connect to vias, pin components, test pads, various forms of contacting connections are provided – crown, needle, funnel, etc. The weak point in testers of this type is the adapter part, which is individual for each type of board.

Given that the product range in large factories is large, the cost of all adapters may be higher than the cost of the test system itself.

The best solution for the production of printed circuit boards with a large nomenclature is the use of equipment operating according to the “flying probe” method.

Testers have several heads with drives along the X, Y, Z axes, each of which has a probe installed.

The heads alternately contact the board with the supply and measurement of the signal; to switch from one board to another; it is enough to change the testing program.

At the same time, the “flying probes” method does not provide high test performance, although the price of the equipment is quite high. 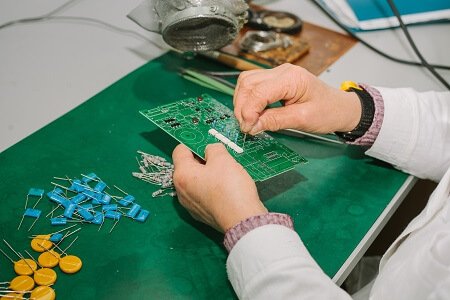 In the PCB production process, some defects may occur in the production of substrates and the process of copper coating, but most of the defects are generated after etching.

AOI is generally arranged for inspection after the etching process, mainly to find the missing parts.

In PCB assembly quality checklist, there are many applications of image comparison algorithms, and mainly plane inspection, mainly including data analysis (preliminary analysis of input data, filtering out small pinholes and residual copper, and holes that do not need to be inspected, etc.) , Measurement (for feature acquisition of input data, recorded with feature code, size, and orientation, and compared with standard data) and topology (for analyzing added or missing features).

Solder paste printing is the initial link of the SMT process, and it is also the source of most defects.

According to data analysis, about 60% to 70% of the defects will appear in the printing stage.

If the defects are eliminated in the initial stage of the production line, it can be minimized Loss and cost reduction.

Therefore, most SMT production lines will be equipped with AOI inspection systems in the printing process.

Using three-dimensional inspection, you can analyze the shape and thickness of the solder paste to check whether the amount of solder paste is reasonable, whether there are defects such as scratches and sharpening.

These defects are more common in the use of screens and squeegees, and are now commonly used.

For stainless steel mesh and metal scrapers, the solder paste thickness is relatively stable, generally not too much, and the scratching phenomenon is also very slight.

The focus is on defects such as empty welding, offset, contamination and bridging. Using plane inspection can effectively detect these defects.

Both image comparison methods and design rule inspection methods can be used.

The inspection time is short and the equipment price is lower than that of stereo inspection.

Moreover, if the AOI system is used in subsequent processes such as patching and reflow, Plane detection can also be used in the printing process considering the cost issue.

Element of the device for accurate placement part is relatively high, often missing paste, offset, skew, and other defects of opposite polarity.

From the point of view of quality assurance, the inspection of the front-end reflow soldering is due to problems that occur in the reflow oven.

It cannot be detected and appears to be meaningless.

In the reflow oven, the solder has the ability to self-correct the displacement after melting, so the placement displacement and solder printing status cannot be checked on the substrate after soldering.

At this time, there are no irregularities on the substrate, which is most suitable for image analysis, and the pass rate is very high. In this way, the possibility of misjudgment caused by excessively rigid detection is greatly reduced.

Testing is a crucial step to ensure that high-quality PCBA products are delivered to customers.

Inspection and testing can reduce processing risks. The following is a collection of several test methods in the PCBA processing industry.

Visual inspection can be achieved at every step of the PCBA process.

In the visual inspection, the magnifying glass is the basic tool, and the metal needle can be used to check the welding incompleteness on the IC lead.

Automatic optical inspection is an automatic visual inspection during the manufacturing process of printed circuit boards, in which the camera automatically scans for catastrophic failures (such as missing parts) and quality defects (such as rounded corner size or shape or component deviation) of the tested PCBA board. 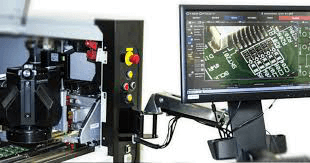 The functional circuit test is the last test before the PCBA product goes on the market.

Unlike other tests (such as AOI, AXI, and ICT), FCT is designed to make UUT (unit under test) work in a simulated environment and use output data to check its actual performance.

Before mass production and assembly, PCB manufacturers and assemblers usually conduct a first sample inspection to check whether the SMT equipment has been properly prepared, so that vacuum nozzles or alignment problems can be avoided in mass production, which can cause problems in PCBA board production. This is called the first inspection.

Flying probe probes are suitable for the inspection of high-complexity PCBs that require expensive inspection costs.

The design and inspection of the flying probe can be completed in one day, and the assembly cost is relatively low.

It can check the open circuit, short circuit and direction of the components mounted on the PCB.

In addition, it works well in identifying component layout and alignment.