Blind and buried vias are used to connect between layers of a PCB where space is at a premium.

A Blind Via connects an outer layer to one or more inner layers but does not go through the entire board.

A Buried Via connects two or more inner layers but does not go through to an outer layer.

Via hole is one of the important components of multilayer PCB, and the cost of drilling usually accounts for 30% to 40% of the cost of PCB manufacturing.

Simply saying, every hole on the PCB can be called a via.

From the point of view of function, vias can be divided into two categories: one is used for electrical connection between layers; the other is used for fixing or positioning devices.

In terms of process, these vias are generally divided into three categories, namely blind vias, buried vias, and through vias.

Blind vias are located on the top and bottom surfaces of the printed circuit board and have a certain depth.

They are used to connect the surface line and the underlying inner line.

The depth of the hole usually does not exceed a certain ratio (aperture).

Buried via refers to the connection hole located in the inner layer of the printed circuit board, which does not extend to the surface of the circuit board.

The above two types of holes are located in the inner layer of the circuit board and are completed by a through-hole forming process before lamination, and several inner layers may be overlapped during the formation of the via.

The third type is called a through-hole, which penetrates the entire circuit board and can be used for internal interconnection or as a component mounting positioning hole.

With the increasing demand for miniaturization and high integration of electronic products, more and more PCB layout designs adopt blind and buried vias technology to improve the circuit density of PCB boards.

PCBs with blind and/or buried vias have more space for wiring than standard PCBs.

And blind and buried vias are widely used in multilayer printed circuit board manufacturing.

What is Via Hole

A via hole in a PCB is a copper through-plated hole, which consists of 2 pads in corresponding positions on different layers of the circuit board, that are electrically connected by a hole through the board.

The hole is made conductive by electroplating.

Barrel: conductive tube filling the drilled hole
Pad: connects each end of the barrel to the component, plane, or trace.
Anti-pad: clearance hole between the barrel and the no-connect metal layer. 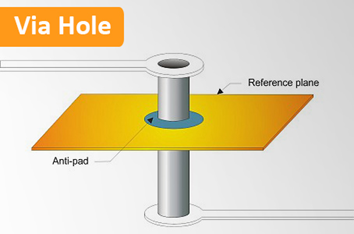 What is Blind Via

What is Buried Via

Connects two or more inner layers but does not go through to an outer layer, and they are not visible from any one of the outer layers.

Blind and Buried Via

We use a combination of depth-controlled laser drilling and mechanical NC drilling to manufacture the blind and/or buried vias.

The blind and buried vias manufacturing capabilities for standard PCBs and HDI PCBs as following. 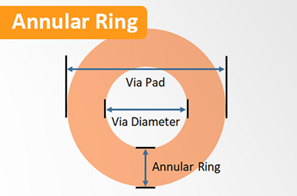 There are two prevalent methods of dividing HDI stickups into different types.

One is the IPC classification, which divides HDI Stackups into Types I to VI.Out of these six types, the most commonly used are type I, type II, and Type III.

The other type of HDI stack-up is M+N+M.

For example, a 1+6+1 stack-up would mean that the central core has six layers while one HDI layer on either side. 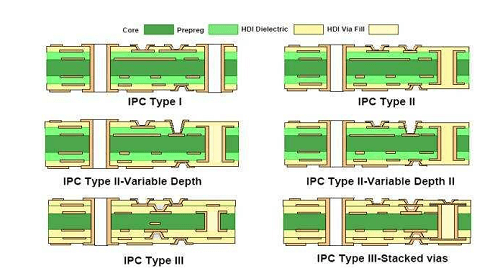