What is LED PCB Board

During the LED PCB manufacturing process, the cards made with advanced technology in accordance with the project of the electronic device are called  PCB Board and another card which is one of these cards is called LED PCB board.

Electronics has to keep up with the technology that is getting faster day by day.

LED PCB board manufacturing comes to the fore especially in products or signs for workplaces where LED products are used frequently.

There is a lot of place for this card manufacturing for the whole production process.

With the advancement of technology, the features of  Pcb Boards and led pcb boards are increasing day by day.

In today’s world, the progress of technology has created differences in many areas.

One of the areas most affected by these differences is undoubtedly the lighting industry.

LED PCB manufacturing process is the products that are used frequently in the lighting industry.

Panel circuit boards are important for this industry.

Electronic circuits require complex work. Quality control of the typesetted and produced products must be made.

In the manufacture of this product, there is a low energy saving and therefore a low cost.

It is aimed to take up less space with the strings made for Led pcb boards.

After its production, it must have passed the reliability test.

LED PCB board is compatible with advanced technology. In the historical process, progress has been made in LED PCB board manufacturing at the point where technology has come.

What to Consider When Buying Led PCB Boards?

The assembly process to be used on the cards as many as the number of orders should be selected.

The productions in this area should be examined from the production stage to the marketing stage and the order should be given accordingly.

These cards are different from  PCB Boards and if you want to manufacture led pcb boards with this difference, the properties of the desired product should be known.

In today’s world, products that are fast and reliable in the production phase that keeps pace with rapidly developing technology should be preferred.

The products of producers that provide harmonious production in this balance without disturbing the ecological balance should be supported.

What is PCB Board Typesetting?

When we say electronics, we are now following the stages of change, evolution, evolution. We observe that the usage areas of electronics are spreading very rapidly. At this stage Let’s see what is PCB board typesetting .

It is necessary to adjust this process according to the development speed of electronics. This typesetting system is very common in terms of its uses. 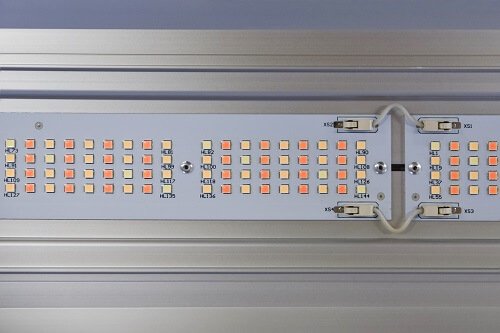 It is whether a sufficiently wide range of typesetting service can be offered on demand.

However, the serial placement of strings is also an important problem.

At this point, led assembly technology comes into play and meets an important need.

Led assembly is defined as an advanced technology product that can provide a serial service in mounting electronic equipment to the surface.

In this direction, it is possible to say that led PCB manufacturing process technology can easily perform even large-scale operations.

Since LEDs are produced in many different models today; Lez typesetting machines also need to be updated within this scope.

It is known that the problem-free production of surface mounting equipment, which we encounter in all electronic devices, is only possible with an effective typesetting service.

At this point, the placement and arrangement of the LEDs emerges as an important problem.

The first stage of LED string; It consists of deciding which type of LED model to use.

After this stage, the selected LEDs are arranged on the typesetting machines.

Professional LED assembly will ensure that this process is smooth.

Here, it is important that the alignment on the PCBs is smooth.

Then enough heat is applied to boil the PCB to the assembly.

Thus, the solder at the connection point melts and the assembly process is completed.

All of these operations can be done with advanced technology machines.

Therefore, the purchase of typesetting services is an issue that requires careful attention.

The issue of processing LED PCB and other LED systems on the surface with the assembly machine involves a sensitive process.

Because the implementation of this process requires a process that requires advanced technology.

The fact that the installation phase of the LED circuits can be done in a quality way is effective for the formation of a problem-free electronic vehicle.

It is known that LED typesetting machines do their job well and that they are related to the quality of the personnel structure. 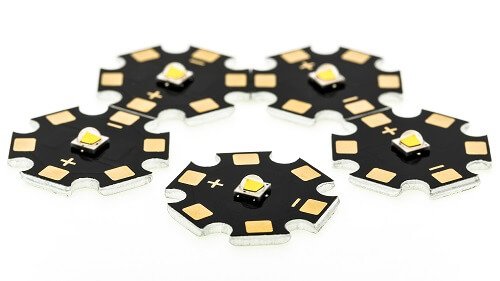 It is important that all the details, from the placement of the LEDs to the strings to the assembly stage, that the led assembly machines provide qualified service. Another important issue here is the automatic buy position.

Because the automatic buying position directly affects the serialization of the machine.

Again, the short duration of the set – up phase in product transitions is directly related to the buying position.

In this process, the data matrix is ​​printed on the cards with laser by burning method.

The cards with a data matrix created by laser are automatically loaded into the magazines (carriers) at the exit of the machine without touching the existing machine system.

It is a led PCB manufacturing process that includes five important processes of SMT Process.

It stands for in-hole assembly technology, and stringing and soldering of legged materials are done in this process.

We can divide this process into four as Radial, Axial, Selective Soldering and Pin Tacking.

Materials of radial type (that is, the legs are parallel to each other and the body, and there are leg connections under the material) are arranged in this process. These items lie vertically on the card.

The axial type (that is, cylindrical and elongated box shape and legs coming out of both ends) materials are arranged in this process. These items are placed horizontally on the card.

The typesetting of materials such as pins and terminals is done here.

As a result of the assembly, the pin locks itself in the hole and does not need any soldering afterwards. Soldering can also be done after this process upon request.

Manual led PCB manufacturing process is applied for materials that cannot be mounted on machines automatically. Soldering can also be done after this process upon request.

Materials whose in-hole assembly string is completed or products coming from the manual assembly line are soldered in this process.

The soldering process is more reliable and risk-free as it is only applied to the points that are desired to be soldered. 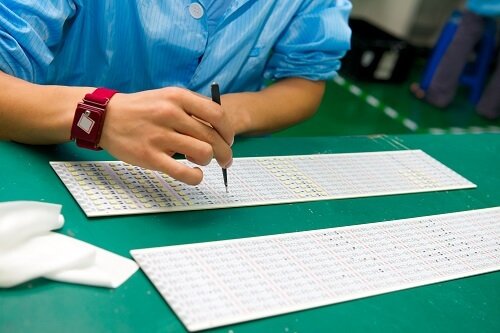 It is used to apply materials such as protective, adhesive, coating etc. to the desired points on the card according to the customer request.

In order to increase the resistance of the cards against environmental effects, regional protective coating is applied according to the customer request.

Three-dimensional checks of the desired materials and regions of the cards are made under X-Ray.

It is used to separate paneled PCBs from each other. This method is safe as it does not stress the card.

Visual control is done in this process. Scratches, cuts, deformed cards or materials that may occur or be overlooked in the lines are detected by this process.

The fact that the LED typesetting machine products can make LED array in a wide range brings some important gains.

Another important feature of the LED typesetting machine is that it is capable of assembling at high speed.

It is also known that minimizing the loss of sensitivity due to abrasion is another important feature during the typesetting process.

Although the typesetting speeds of typesetting machines are calculated per hour, it is known that an ideal speed is around 21,000 components per hour.

In the light of all this information, it is possible to say that it is essential to improve the production capacity of a quality LED assembly machine product.

High speed, minimizing the loss of sensitivity and ensuring the precision of the typesetting are other important features.

As of today, it is known that led typesetting machine products come out as the most important means of installing led strings without any problems.

In this context, purchasing led typesetting machine products equipped with the most advanced technologies is of course an important issue.

However, it is known that the affordable purchase of the led typesetting machine is another important issue.

Therefore, it is known that the price research on the prices of the led assembly machine brings important opportunities with it.

The color, power and other manufacturing details of the LEDs determine the operating voltage of the LED.

With a small change in voltage, the current changes a lot.

The temperature reached by the LEDs during operation also affects the voltage and indirectly the current.

The source that supplies the power required to power an LED or LED array is called an LED driver.

Constant current power supplies are used in the supply to prevent the LEDs from failing by drawing excess current.

The constant current LED driver is designed to deliver a constant output current within the specified voltage range.

This part allows the system to maintain its performance for a long time and to operate without failure up to the lifetime specified by the manufacturer of the LED.

Design studies are initiated with the selection of integrated circuit developed specifically for LED lighting applications.

Some calculations are made according to driver characteristics and other circuit elements to be used (such as resistor, diode, capacitor, transistor, and fuse) are determined.

After the schematic design, the printed circuit board ( PCB ) drawing is started.

After drawing the circuit, the printed circuit board is produced. Circuit board production is done by PCB manufacturers.

After the printed circuit board is produced, the electronic assembly stage is started.

LED driver components are soldered to the board with an automatic placement machine.

While some manufacturers have their own typesetting line, some outsource this service.

If there is no connector on the driver circuit, the cable is soldered to the input and output points.

Brown and blue cables are generally used at the entrance and red and black cables at the exit.

The red cable at the output is soldered to the anode (+) and the black cable to the cathode (-) output.

The driver circuit is placed in a metal or plastic body according to the need after the assembly process.

In the LED drivers that are planned to operate in outdoor conditions, resin is filled inside the chassis to ensure impermeability.

The chemical filled into the drive hardens, protecting it from vibration, shock and other physical damage.

The basic characteristics of the driver are written on the LED driver body with laser marking or a label.