The Emergence, Development and Improvement of Printed Circuit Boards

Having disassembled any modern electronic device, you will find a printed circuit board in it.

But to create this element, various technologies are used, the history of the appearance of which I would like to trace.

Fortunately, you won’t have to dig far into the sands, because the printed circuit board is a little over a hundred years old.

From the History of Printed Circuit Board Technology

Printed circuit boards today are the backbone of any electronic device, professional and amateur radio.

However, their modern production is a combination of various technologies, sometimes complementing each other, sometimes alternative. When did this element of electronic equipment and related technologies first appear?

Probably the prototype of all modern printed circuit boards was first developed by German engineer Albert Parker Hanson in 1902 (filing date with the German patent office).

Its development was associated with the then rapidly developing telephony and was far ahead of its time.

Hanson’s method involved the formation of a pattern on copper or bronze foil by cutting or stamping.

Next, the formed elements of the conductive layer were glued to a dielectric – paraffin paper or something similar.

The inventor already then understood the importance of increasing the density of conductors, so his technology involved gluing a conductive layer to a dielectric on both sides, and through-hole connection holes were also provided. Hanson pointed out.

The Role of Thomas Edison in the Development of PCB

It is known that Thomas Edison independently expressed similar ideas.

When asked by Frank Sprague, founder of Sprague Electric, how to “draw conductors on paper,” the great inventor outlined several possible approaches in writing.

The first of them is to form a pattern using an adhesive polymer material and, while it has not hardened, sprinkle it with graphite or bronze finely dispersed powder. 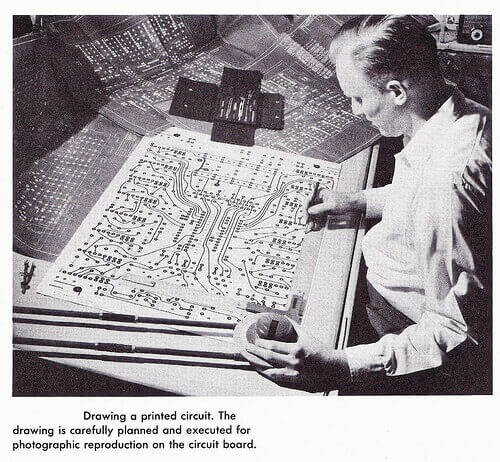 The second approach is drawing a pattern on a dielectric with silver nitrate (a well-known and widespread lapses lid) followed by the reduction of silver from the salt.

Edison’s third method was to use gold foil to form a conductive pattern.

Although Edison did not directly mention the printing process, his ideas are widely used in modern technology.

So, It is easy to see that all early PCB manufacturing methods were additive.

At the same time, since the time of the Gutenberg press, a subtractive process has been used in the printing industry – an image is formed by removing unnecessary fragments. First by cutting on boards, then etching on metal plates. Actually, the term “printed circuit board” is a direct tracing paper from the English printing term printing plate – a printed form (matrix).

Obviously, subtractive technologies, already sufficiently developed in the printing industry, could not but come to the production of printed circuit boards. This method was first patented by Arthur Berry in 1913.

He proposed covering a metal surface with a pattern-forming resist layer and then etching away the exposed portions of the surface.

The technology of photolithographic production of printing plates was first described in detail in a patent of Ellis Bassist, who lived in the USA, in 1922.

Although his method was intended for printing, it could easily be adapted to the production of printed circuit boards. B

assist describes in detail the technology of prototyping, which includes, among other things, the use of photosensitive chromium salts, as well as the manufacture of PCB blanks by electrolytic deposition of copper on a dielectric substrate.

In 1918, Swiss inventor Max Schoop developed an industrial method for metal flame spraying. Its technology made it possible to deposit thin highly conductive layers through the mask, thereby reducing the energy consumption of the equipment.

The disadvantage of this method was the high cost and problems with the formation of high-quality layers of the deposited metal.

The patent of the American inventor Charles Ducas already contained a description of both the etching technology and the conductor metallization mechanism.

One approach by Dukas involved the formation of a conductive pattern by electrolytic deposition of copper, silver, or gold onto a low-temperature metal alloy through a contact mask. When heated, unprotected alloy fragments were removed.

Another Dukas method is the formation of grooves in a wax-type dielectric, which were filled with conductive pastes and electrochemically metallized. Note that Dukas’ patent described the formation of conductors on both sides of a dielectric substrate, as well as the application of a conductive track on a cylindrical surface.

The developer pointed out, that his invention is aimed at the formation of individual circuit nodes – in particular, inductors.

The dielectric was wax paper and gutta-percha. Copper and lead conductive pastes were also used, followed by copper plating.
In 1926, French developer Cesar Parolini developed an additive method for forming a conductive layer, proposed by Edison and Doucas, – forming a pattern with an adhesive material on the surface of a dielectric and, while it has not polymerized, applying copper powder to it. Excess copper particles were shaken off, polymerization was carried out with heating. Parolini also proposed the use of a later common PCB element such as wire jumpers. They had to be installed before the polymer solidified.
In 1933 Erwin E. Franz, USA, developed a method of forming a conductive pattern on cellophane or similar material. Used polymer “ink” with a conductive filler – graphite.

After the war, he and his wife practiced in their kitchen the technology of galvanic deposition of copper foil and its etching with ferric chloride. Initially, the developer believed that the main application of his technology was the creation of electric heating elements located on a variety of materials and objects – from wallpaper to aircraft wing linings and canned food packages. In 1948 he founded Technograph Printed Circuits, a printed circuit board business, and began the process of patenting his technology in the United Kingdom and the United States (his first patent applications were filed in 1943-1944).

A total of about 50 British and North American patents have been obtained. It is noteworthy that in the United States, a rival company, Bendix, filed a lawsuit against Eisler, proving the invalidity of his patents, since, according to the plaintiff, apart from a new field of application (in radio electronics), they did not contain anything fundamentally new.

In 1963, Bendix finally won the case, and Eisler was formally dethroned as the founder of modern printed circuit boards.

Perhaps there is a lot of truth in this since one person cannot be the sole inventor of printed circuit boards, their creation is the result of the work of many people around the world.

However, it should be recognized that P. Eisler’s contribution to the technology of printed circuit boards is enormous and undeniable.

In 1948, the United States approved standards according to which all aviation electrical equipment must be made on printed circuit boards.

From the mid-50s, the formation of printed circuit boards began as the basis of all household electrical appliances. The new industry finally got on its feet and has been successfully developing since then.