PCBMay is a Professional single-sided flexible PCB supplier in China, and we can provide a one-stop solution for your project.

For flexible PCB capabilities, please refer to the following form. 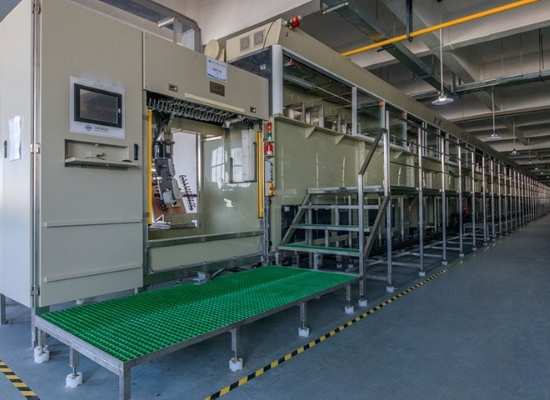 Releted Some Other PCBs

Why Choose PCBMay for Your Single-Sided Flexible PCB

As a leading single-sided flexible PCB manufacturer in China, PCBMay can offer a turnkey solution for your project. From PCB design & layout, PCB fabrication to PCB assembly, all processes are in-house and not outsourcing.

The quality is under our control, meanwhile, we can assure the delivery time.

If you have one project that needs to be produced in a hurry, PCBMay can help you to make it. We can produce the prototype of a single-sided flexible PCB within 24H and ship it by UPS, FedEx, or DHL.

Single-sided flexible PCB has one conductive copper layer and one coverlay.

We have full service for quick-turn jobs and state-of-the-art equipment. It can meet your complicated project deadlines and budgets.

There are many different applications for single-sided flexible PCB, such as bar code equipment, cameras, smartphones, GPS systems, motion systems, and Satellites.

Are you looking for a premier single-sided flexible PCB supplier? PCBMay is your best choice. PCBMay has over 500 workers in our workshop and the monthly capacity is 40,000 square meters.

When you have any single-sided flexible PCB inquiry, please send it to us.

In this guide, there’re many questions about single-sided flexible PCB. You will get the answers here, so please start to read them. 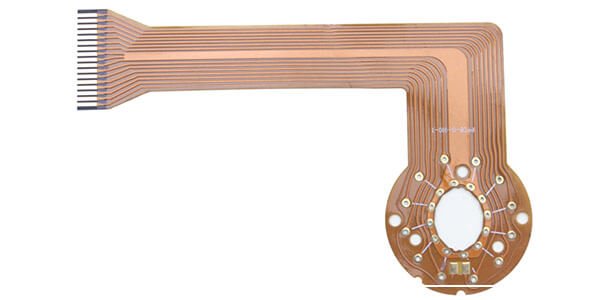 What Is a Single-Sided Flexible PCB?

They’re made up of a lightweight dielectric film that’s been laminated to a single copper layer.

After that, the copper coating is chemically engraved to fit the circuit pattern style. For improved insulation and safety, polyimide cover layers may be added to the circuit board.

A single-sided flexible PCB is the type of circuit board that consists of a flexible polyimide film laminated to a thin sheet of copper.

This Circuit is also known as single-layer flex. Then The copper layer is chemically etched to produce a circuit pattern specific to your specific design requirements.

In this circuit, Polyimide coverlay is added for insulation and environmental protection of this circuit.

One conductive copper layer and bonded between two insulating layers of polyimide coverlay/copper/flex core is added in this layer. Flex Core Materials are : 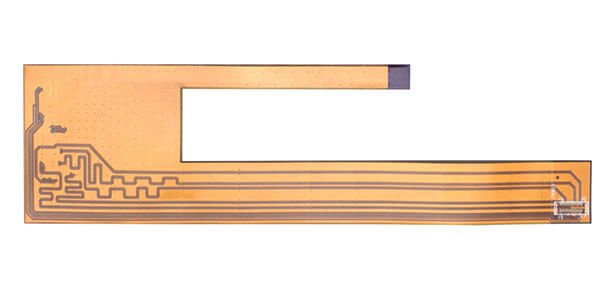 How To Design a Single-Sided Flexible PCB?

A single conductive copper sheet is bonded between two insulation layers or one polyimide insulating layer, and an exposed side is used in the one-sided flexible PCB configuration.

After that, the circuit outline is carved out of the internal copper sheet using a chemical etching technique.

Components, cables, pins, and stiffeners may all be seen on single-sided flex PCB boards. Similarly, certain single-sided flexible PCBs feature a dual-access mechanism that enables access to the conductive material from both sides of the circuit.

This design purpose necessitates a compact PCB and specialized layers to create access for the single copper layer via the base material’s polyimide layer.

What Is The Layout Of a Single-Sided Flexible PCB? 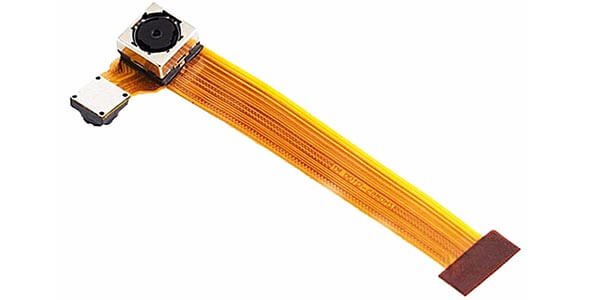 What Is The Stack-Up Of Single-Sided Flexible PCB?

The requirements imposed on a single-sided flexible circuit stack layout must be met continuously over the product’s existence.

The material must also fit together with the other layers of the flexible circuit stack to maintain the simplicity of manufacturing and durability.

The primary layers of the flex circuit stack and their roles are defined in the following subsections.

The lightweight polymer film that acts as the laminate’s basis is regarded as the base material.

It is liable for the bulk of the flexible circuit’s critical physical and electrical properties.

The base material contains many of the signature properties of adhesive-free circuit constructions.

The material hardness is proportional to the cube of the thickness, which means that doubling the thickness renders the material eight times stiffer and still deflects 1/8 as much under the same load.

Modern thin-film technology allows the production of ever-smaller circuitry at a lower cost and with greater efficiency.

Adhesives serve as a bonding agent for laminates, but they are still an essential component of the circuit’s dielectric structure.

A flexible PCB is produced with a laminate, which is a metal-clad film. Because of their lower temperature tolerance, adhesives often restrict laminate efficiency, particularly when polyimide is used as the base material.

Many adhesives have a lower temperature capacity than thermoplastic polyimides. Also, with elevated temperatures and loads, many of them can soften. The thermoplastic/thermoset polyimides that withstand movement are the best-performing modern products.

These laminates are sometimes referred to as adhesive-less because they are adhesives in the true sense.

Different thicknesses of adhesives are available. Its use usually determines the thickness of a material.

Different adhesive thicknesses are widely used to build cover layers to satisfy various copper foil thicknesses’ fill requirements. Thinner adhesives give the copper more stability to get it closer to the base film.

Thinner adhesives will also save money by running quicker at the converter and using less total material, which can be costly depending on the material formulations.

It’s not unusual for a certain adhesive thickness to be used to render a cover layer to satisfy the full specifications of a specific form of a circuit. 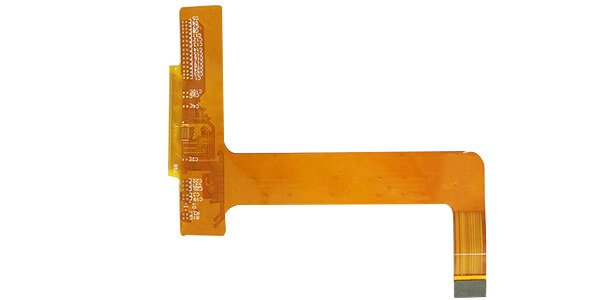 The most popular conductive material in a flexible laminate is a metal foil. It is the substance from which the circuit tracks are usually etched.

What Are The Benefits Of Single-Sided Flexible PCB?

In interconnection applications, the real benefits of flexible circuits compared to conventional cabling and rigid PCBs include: 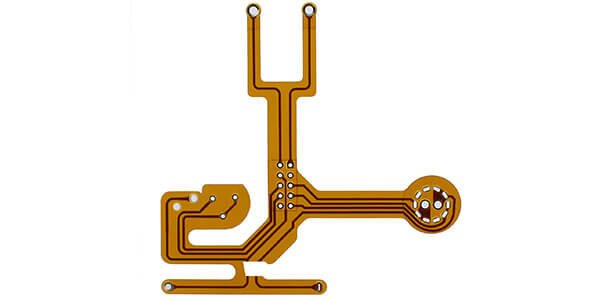 What Are The Materials Of Single-Sided Flexible PCB?

Flexible circuits are created from a broad range of materials, including films, foils, and adhesives.

The components to use are heavily influenced by how and when the circuit would be constructed and used in the end.

A careful assessment of the various materials’ relative merits might be needed to choose the right option for a particular application.

Flexible circuits depend highly on the nature of base materials.

There are some excellent materials for making flexible circuits, but there is no perfect solution.

A material that has all of the benefits and none of the disadvantages does not exist.

Today, a standard flexible circuit consists of a thin base dielectric polyimide (PI) film with a thickness of about 50 to 125 microns.

Manufacturers have learned to handle these materials to have acceptable yields in high-volume environments, particularly in semi-automated and automated processes.

Flexible circuits with the measurements mentioned are routinely produced with good results and tolerances.

Dimensional stability is necessary for the flexible laminate. Both the producer and the consumer are concerned with shrinking or expanding a flex circuit base material during manufacturing.

There are some approaches to dealing with the consequences of dimensionally variable products.

The EU has ordered a transition to lead-free soldering in Europe and has place restrictions on halogenated flame retardants.

Many products have been reformulated or withdrawn as a consequence.

The majority of flex circuit constructions utilize soft, unreinforced base materials that are prone to tearing.

Given the thin and fragile design of flexible circuit base materials, tear-resistance is a crucial feature. There are construction methods that can be used to alleviate tearing problems.

Flexibility is an essential material characteristic that is often a key characteristic. Temperature extremes, varying from a hot cook stove to cryogenically frozen, may be imposed on single-sided PCB flexibility.

Flexibility is particularly essential at low temperatures, where most materials become brittle.

Flexibility criteria may often change based on the application, and different products can be evaluated in different ways.

Flexible circuits with a single side are more costly than rigid PCBs. Designers also seek out low-cost products.

However, bear in mind that although a new material might be less expensive, it may also necessitate different manufacturing.

It may also have a distinct design, which may be troublesome in certain situations.

A red coloration shows ED copper in certain places, and it is generally believed to be of more inferior quality. In some instances, black-colored copper is mistaken for black copper oxide.

Epoxies and acrylics have various storage and laminating requirements and function best in some areas, but they are not often approved due to preconceptions.

Electrical properties for flexible circuit materials can be adapted to the design’s efficiency specifications.

The loss tangent or dissipation factor (Df) and dielectric constant (Dk) should be minimal.

For a variety of high-voltage uses, high insulation resistance is a valuable property.

A low Dk/Df adhesive or bonding layer will help you save resources and space by reducing your polyimide’s thickness.

The adhesive is in direct contact with the conductor, acts as a dielectric, and contributes to electrical output.

Other implementations, such as those with higher capacitance, can have different specifications.

What Are The Applications Of Single-Sided Flexible PCB?

There are two elementary types of applications of flexible circuits.

This type is known as flex-to-fit, and in this type, flexing is not frequent. Flex circuits are installed to adapt to a particular application in this application. It’s best described as a one-time bending.

In this type, flexing is quite frequent. It is used in applications in which the flexible circuit needs to bent multiple times as part of the application functionality.

The advantage of density improvement is multiplied by the use of small electronic components to complement and enhance flex technology’s minimalist packaging ability.

To minimize electronic packaging interconnection size, the bare IC is packed on the flex circuit in practice. In this field, some of the more popular applications are: 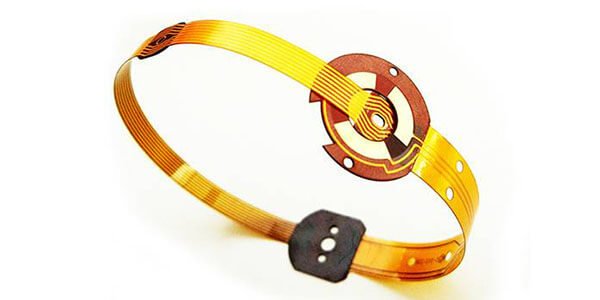 Although flexible circuits have been used in various items, the most valuable has been their medical devices usage.

They have given life-changing advantages to people with different medical conditions. The use of flex circuits in clinical applications can be classified into the following categories:

A single-sided flexible PCB is the most basic form of a flexible circuit.

On single-sided flex PCB boards, components, wires, sticks, and stiffeners can all be used. Flexible circuits have been utilized in various products, the most valuable of which has been medical equipment.