The performance of any electronic device depends on the PCB.

In fact, PCB trace is an essential part of each PCB just like a current.

Moreover, if engineers have used a wrong calculation in fitting the trace, it will obviously take much energy and time to correct it.

So, if electronic engineers use the wrong trace in their PCBs, their products will perform poorly.

In modern technology, PCBs are the basic element in almost all areas.

And everything around you totally depends on PCBs. Whether they are smartphones or 3D printers, the electronic industry totally relies on these PCBs.

Furthermore, the popularity of Printed Circuit Boards is rapidly increasing day by day in our daily life.

What is PCB Trace?

As we have already described that PCB trace is part and parcel of every PCB.

When we talk about PCB, trace involves the network of 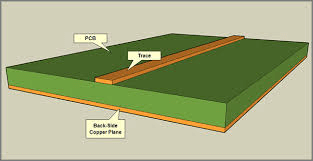 Hence, the perfection of PCBs totally depends on the trace.

Whenever you find any type of inconsistency in your electronic device. Then it is clear that there is a serious fault in the trace.

Moreover, it is a fact that the performance of electronic appliances totally depends on the correction of trace.

The most regular term which electronic engineers use in the industry of PCB is trace resistance.

Basically, the meaning of PCB trace resistance is parts of a PCB that resist the electric flow.

Furthermore, there are several different components in PCB.

But it is really important for you to know that which materials and parts you need to assemble or repair the PCB.

These PCBs help to save lots of space and also reduce the overall weight of the board.

Furthermore, there are many kinds of PCBs but flexible PCBs are ideal for countless applications because in several applications electronic designers need high signal trace density.

The Thickness of PCB Trace

In any PCB design, the PCB thickness always plays an essential role for all electronic devices.

Because the thickness of PCB has the ability to maintain balance. But there is no danger of PCB damaging. Moreover, thickness also involves all the components which engineers connect to the circuit board.

It is a real fact that in PCB design, the width of the PCB trace is very important to design parameters.

Moreover, this is very essential for the designers to do an appropriate trace width.

Hence, in this way, they can be sure that this trace has the ability to transfer the perfect amount of current.

But without damaging and overheating the board.

In fact, a higher amount of current requires thicker traces. On the other hand, the thicker weight of copper also permits thinner traces.

Furthermore, here is the formula for the resistance of a trace: 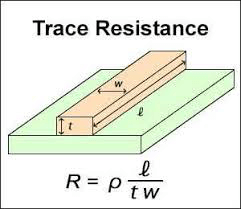 Additionally, there is something most important for you to understand before measuring the PCB trace width.

In fact, it is very complicated to calculate the trace width in comparison to any conductor.

Moreover, there are several facts which you must consider before calculating the width of the trace of any PCB.

The first thing that you have to know is maximum electricity which basically has the ability to perform the functions of the board as input. Furthermore, it includes,

It has the ability to make a deep effect on the width input ranges.

As you plug the numbers into the calculator, you will obtain the output figures.

Hence, all the above information will help you to understand clearly that what the actual width of trace is.

As we know that PCBs are the basics of electronic devices. Moreover, the performance of your products totally relies on these PCBs.

There are several materials which manufacturers use to fabricate PCBs.

Nowadays, electronic engineers are rapidly using copper in order to create their PCBs. Here are some benefits that copper has in comparison to other materials. These are:

The first and most beneficial advantage of copper is,

Because it has the capability of easily transmitting of signals.

In fact, an ounce of copper has the ability to create 35 micrometers about 1.4 thousandths of an inch thick.

And these micrometers have the ability to cover all square feet of the PCB substrate.

Copper is highly conductive because it possesses only one valence electron.

These kinds of electrons have the ability to travel freely from one atom to the other. But with very little or less resistance.

Hence all the above factors have made copper an ideal choice to create PCB trace. Because copper has many advantages in comparison to other metals for the entire fabrication of PCBs. Furthermore, it is low cost and you can get it easily for your perfect trace of PCB.