Via Filling is a Technique that Guarantees Completely Closed Via Holes.

This can be Via Filling with Resin or with Soldermask.

Via hole, also known as a conductive hole, plays the role of connecting lines to each other.

With the development of electronic products in the direction of “lighter, thinner and smaller”, PCBs have also developed to high density and high difficulty.

Therefore, a large number of SMT and BGA PCBs have appeared, and the plugging process has been produced.

What is Via in Pad

With the development of electronic products and applications of finer pitch devices, vias play an important role in the interconnection between layers in a PCB。

There are three main types of vias: through-hole vias, blind vias and buried vias, each of them has different attributes and functions contributing to the overall optimal performance of circuit boards or even electronic products.

However, via in pad have been widely used in small-scale PCBs and BGA.

With the necessity of high-density BGAs (ball grid arrays) and the miniaturization of SMD chips, the use of via-in-pad technology is increasingly important. 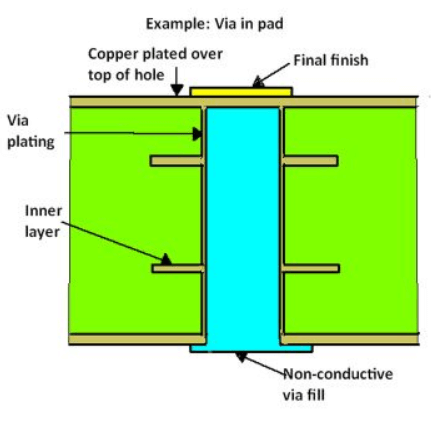 What is Via Plugging

Via plugging is a process in which vias are completely filled with resin or closed with a solder mask.

This technique is different from via tenting where resin/solder mask doesn’t fill the via hole but just provides a covering. 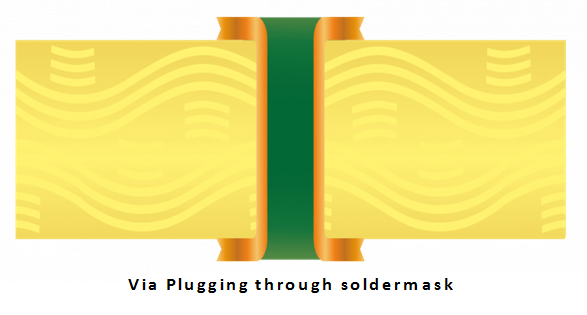 Via Plugging through Soldermask

Via plugging is done as a preventive measure to secure the vias from the unwanted flow of solder material during the assembly/soldering process.

During the soldering process, if a via is not plugged or tented, the solder can flow down the via from the pads and can create unnecessary solder joints.

Application of Soldermask Layer on a PCB after Plugging

Via plugging can be done through conductive or non-conductive material.

The conductively filled vias help to carry a large amount of current from one side of the PCB board to another.

However, the main drawback of conductively filled vias is the difference in CTE (Coefficient of Thermal Expansion) between the conductive fill and surrounding laminate.

During PCB operation, the conductive material will heat and expand at a faster rate than the surrounding laminate, which can cause a fracture between the via wall and associated contact pad.

The via holes filled with non-conductive materials will still function like normal vias.

However, they will not be able to carry higher current loads like those filled with conductive materials.

What Difference Via Plugging with Resin and Soldermask

the main difference is the fullness. In other aspects, such as acid and alkali resistance, resin plug holes have an advantage over green solder mask.

The process of using resin plug holes in PCB is often due to BGA components, because traditional BGA may make VIA between PAD and PAD to the back of the lines.

But if the BGA is too dense and the VIA cannot go out, you will make via and then directly drill from the PAD to another layer to route the lines.

Then the hole is filled with resin and copper-plated into PAD, which is commonly known as the VIP process (via in pad).

If you just make via on the PAD without plugging the hole with resin, it is easy to cause leakage of tin and lead to a short circuit on the back and front Empty welding.

The process of PCB resin plugging includes drilling, electroplating, plugging, baking, grinding, and drilling, then the holes are plated through, then the resin is plugged and baked, finally the resin is polished and smoothed, make sure there’s no copper.

Therefore, it needs to plate one copper layer to turn it into a PAD.

These processes are all done before the original PCB drilling process, all via plugging with resin and plating, then other holes are drilled, it will follow the standard process for this PCB.

In fact, the HDI board should have vias plugging with resin and plating.

Generally, the opening solder mask is the through-hole,in other words, the size of the PTH is more than 0.35mm, there should be no solder mask oil in the hole.

The via plugging with solder mask is mainly used for the plugging of the BGA multi-layer board in SMT production.

The NPTH hole with a diameter is less than 0.35mm.

The reason for the via plugging is to prevent this NPTH from being in the natural environment for many years, after being oxidized and corroded by acid and alkali, it will cause a short circuit and cause poor electrical properties, so plugging should be made.

The standard for BGA plugging is opaque, and it is best to fill up two-thirds of the hole.

It seems that some customers who have BGA require via plugging solder mask.

Parasitic Capacitance and Inductance of Vias

The main effect of the parasitic capacitance of the via hole on the circuit is to extend the rise time of the signal and reduce the speed of the circuit.

It can be seen from these values ​​that although the effect of the rise delay caused by the parasitic capacitance of a single via is not obvious if the via is used multiple times in the trace for interlayer When switching, multiple vias will be used, which must be carefully considered during design.

In actual design, the parasitic capacitance can be reduced by increasing the distance between the via hole and the copper area (AnTI-pad) or reducing the diameter of the pad.

Parasitic capacitances exist in vias as well as parasitic inductances.

In the design of high-speed digital circuits, the harm caused by the parasitic inductances of vias is often greater than the impact of parasitic capacitance.

Its parasitic series inductance will weaken the contribution of the bypass capacitor and weaken the filtering effect of the entire power system.

We can use the following empirical formula to simply calculate the parasitic inductance of a via: L=5.08h [ln(4h/d)+1]

Where L refers to the inductance of the via, H is the length of the via, and D is the diameter of the center hole.

Such impedance can no longer be ignored when high-frequency current passes.

Special attention should be paid to the fact that the bypass capacitor needs to pass through two vias when connecting the power layer and the ground layer so that the parasitic inductance of the via will double.

How to Use the Vias

Through the above analysis of the parasitic characteristics of vias, we can see that in high-speed PCB design, seemingly simple vias often bring great negative effects to circuit design.

In order to reduce the adverse effects caused by the parasitic effects of vias, the following can be done in the design:

Here you will find many quick questions and answers about Via Filled and Via in Pad, don’t hesitate to contact us, our email is sales@pcbmay.com.

What is Via Filling?

As a refresher, a via is a copper-plated hole that is used to connect two or more layers within a PCB together.

Via Fill is a special PCB manufacturing technique used to selectively and completely close via holes with epoxy.

There are many instances in which a PCB designer might want to have a via filled.

What is A Via In Pad?

In PCB design, via refers to a pad with a plated hole that connects copper tracks from one layer of the board to another layer (s).

What is Via Plugging In PCB?

Via plugging is a process in which vias are completely filled with resin or closed with a solder mask.

The conductively filled vias help to carry a large amount of current from one side of the PCB board to another.

Can You Put A Via On A Pad?

Via in pad is the design practice of placing a via in the copper landing pad of a component.

Compared to standard PCB via routing, via in pad allows a design to use smaller component pitch sizes and further reduce the PCB’s overall size.

Via-in-pad plated over (VIPPO) design is one technique that allows a solder mask and soldering to in-pad vias with a small cross-section.

After copper plating and filling with epoxy, the filled hole is capped with a copper pad.

Electronic components can then be soldered directly to the VIPPO pad.

What is A Thermal Via?

Thermal vias are—very simply—holes located under a surface-mounted heat source in a circuit board that allows heat transfer.

Simple vias or via-in-pad can provide a large reduction in thermal resistance.

The number and position of thermal vias have a direct impact on thermal resistance.

Should Vias Be Tented?

Vias that are also in close proximity to SMT pads should also be tented.

This will prevent the solder paste from wicking into the via and creating a poor solder joint.

Vias are tented to prevent solder paste from flowing into the via.