Breadboard is the device which is used for making prototypes.

No matter, whether you are making a small electronic gadget or a robot, you need to make its prototype to check its working.

After successful prototype on breadboard, it is fabricated on printed circuit board (PCB).

The design engineers are well aware of the suitability of a specific type of board for a specific purpose and after its successful prototype, the fabricate the board’s circuit on to PCB.

The fabrication of printed circuit boards is of two main types. One is the breadboard and second is PCB itself.

Breadboard is somehow more used in general projects, whereas PCB is preferred to be used in specific, custom, and goal-oriented projects.

None has priority over the other type because the use and purpose of both breadboard and PCB are different. Therefore, the decision is purely based on demand of the project either to use PCB or breadboard.

What is Printed Circuit Board?

Printed circuit board also abbreviated as PCB is mechanically supporting and electrically connecting the components with the help of conductive layer (copper) among different layers of substrate which is non-conductive in nature.

The components are to be soldered on to PCB for both mechanical stability and electrical connectivity.

The printed circuit board is the fundamental and vital block of the contemporary electrical and electronic devices.

PCBs are of different types ranging from single to many layers. For example, single layer PCBs are used in the garage door opener, radio, television, and telephones etc.

Whereas multi-layer PCBs are used in devices such as high-speed electronics, smart watches, and super computer etc. Various components which are composing the electronic equipment are mounted on to the PCB such as connectors, diodes, semiconductors, radio devices, capacitors, inductors, and resistors etc.

The printed circuit boards are having both electrical and mechanical qualities which are making them ideal to be used in a vast range of applications.

Most of the PCBs which are manufactured are rigid but a few devices also have other types such as flexible PCBs.

The flexible PCBs are bendable which means that these circuits can be molded in to any shape.

The flexible PCBs have a long life when compared to other types of PCBs. However, flexible PCBs are only used to about 10 percent of the PCBs market. 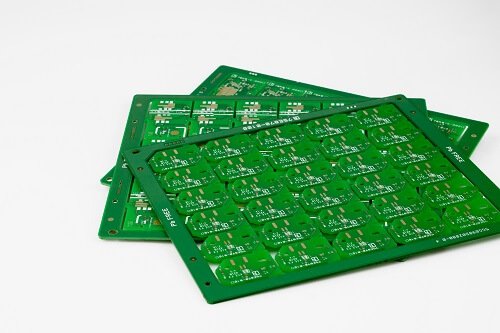 The following are major characteristics of printed circuit boards.

Printed circuit boards in its initial phases used through-hole technology and mounting of all the components through leads which were to be inserted via holes through either of sides of board and then being soldered with help of copper traces on its other side.

These boards were single and multi-layered depending on the application. Through hole components installation such as diodes, resistors, inductors, and capacitors etc., in horizontal mode is achieved through bending its leads over 900 in its same direction before its insertion on to the board. With through-hole manufacturing of PCBs as many holes are added as possible on to the board with accurate drilling.

The limitation of holes is available through its routing areas for transmitting the traces of signals over different layers immediately below top layer in the multi-layered boards.

The surface mount technology has emerged as early as 1960 in field of printed circuit boards and has gained momentum with slow pace until 1980 when it was adopted worldwide.

The components were redesigned on mechanical aspects in order to have smaller metallic tabs along its end caps which were supposed to be soldered over surface of PCB instead of wires leading to pass through a few of the holes.

With the establishment of this technology, size of components shrunk and its placement on to PCB became easier.

This made the assembly process of PCBs very easy. Surface mounting technology brought revolution to the industry as it offered automation, labor cost reduction, and increasing production as well.

The weight of components has reduced to about one-tenth in surface mounted technology when compared to ordinary PCB technology. This has also made the components to become much cheaper and better in quality than before.

What is a Breadboard and How does It Work?

The term breadboard has originated from the early stages of electronics field.

During this time, people used to drive screws and nails on to wooden boards over which they used to cut bread in order to connect different circuits.

This is how its name was originated as breadboard.

Breadboard is also sometimes known as the protoboard. Breadboard is considered as the main ingredient of do it yourself (DIY) electronics.

Breadboard is a common device which has a sole purpose of building prototype circuits without any soldering. Mostly composed of a plastic material, breadboard has numerous small holes on to which different components are inserted.

The most common shape of breadboard is rectangular; however, it also come in variety of other shapes too.

The circuit composed on to breadboard is not permanent and can be removed whenever needed unlike PCB which is permanent.

The importance of breadboard cannot be denied when it comes to testing, designing, and experimentation of a specific circuit before it’s PCB is manufactured and fabricated. 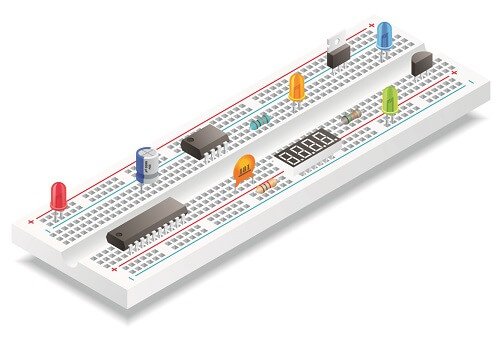 As discussed earlier, a circuit is created on breadboard before it has been planned and implemented on to the PCB so that circuit may be reconfigured and changed in case to manage required changes. The schematics is to be drawn and then connected accordingly.

The main goal of breadboard is prototyping a circuit. The breadboard has two rows and five columns in the form of holes above and below a dividend region. The rows of the breadboard are connected underneath in horizontal way.

While, column holes are connected underneath in vertical way. Channeling is provided among each two rows and a chip with pins can be placed over the sides for connection and prevention from short circuiting.

The integrated circuit (IC) chips can also be placed over the breadboard and pins can be accessed on either side of the board through existing chip.

How to Use Breadboard?

The breadboard is basically array of metallic clips of conductive nature which are encased inside a white plastic box. Each of the conductive clip is being insulated through other clips.

The quantity of holes is different on different breadboards but the most common breadboard has 10 vertical holes in each column (socket strips) and two horizontal rows in rows (bus strips).

The total number of columns for both horizontal and vertical holes are 64. The breadboard is having two different types of regions which are also known as strips i.e., socket and bus strips.

The bus strips are for providing main power to the circuit while socket strips are for holding components and building circuit. The most common method of using breadboard is as follows. 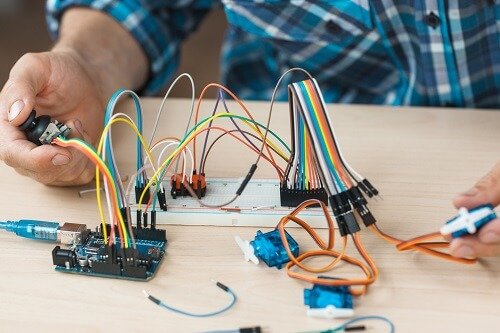 What are the Types of Breadboard?

There are two major types of breadboard. 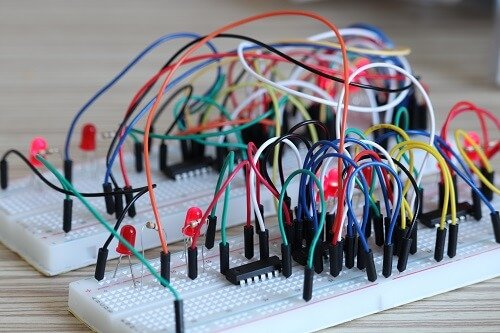 What are the Advantages of PCB and Breadboard?

The following are main advantages of using breadboards.

The following are main advantages of using printed circuit boards. 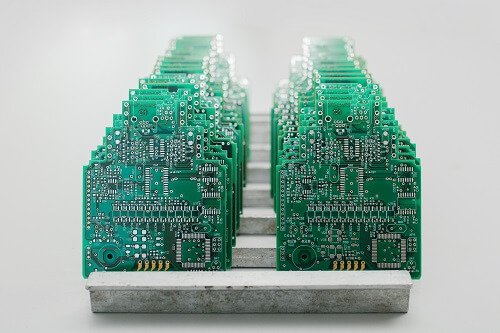 How to Calculate the Breadboard Price?

The price of breadboard is very nominal. Breadboards are available in the market easily and its price ranges from $2 to $10 depending on features, spacing, and current capacity etc.

Furthermore, the price of a breadboard with complete circuit on to it depends on the circuit. This is because different circuits have different components.

While considering a simple circuit with ordinary components such as resistors, capacitors, inductors, and LEDs will have nominal price but a circuit with sensors, switches, and heat sinks will be a bit expensive.

Therefore, research on the pricing of components that are to be used in the circuit is a must thing to do.

Now that everything about both PCB and breadboard is clear we can easily understand that there is a time when PCB is preferred and when to opt for breadboard for making circuit.

This is all depending on the circuit being made, its stage, and status of the project. These factors are helping in making decision whether to use a breadboard or PCB.

Normally, breadboard is always preferred when testing the circuit and its connections is concerned.

This is how movement of components is possible without having an impact on the circuit board as the composition of circuit is not permanent.

However, current carrying capacity is minimal in this case and better working must be done before developing actual board which is permanent i.e., PCB.

The printed circuit boards are utilized in the actual electronic and electrical devices.

After testing and working of a circuit is finalized through its formation on breadboard, its PCB can be designed. Printed circuit board is a permanent device in the electronic components because components are soldered on to it.

Therefore, the use of PCB and breadboards are both important in its own aspects, usability, and features.

PCBMay could help you to produce printed circuit board and breadboard,so when you have inquiry,please email to us sales@pcbmay.com.